Two hours in, and I was over it. My sister and I were wandering the grounds trying to figure out where the party was happening because it sure wasn’t where we were. I was over Oktoberfest. It wasn’t that great, people plowed over me and no one could help us get to where we needed to be.

Another chaotic hour of pushing, switching wristbands and begging got us into a tent. The second I pushed past the doors and walked up the stairs, I understood the hype. The vibrant ribbons and hanging leaves danced in the purple lights. I slipped in between chatting friends and ducked under flailing arms from above on the benches. Never has a room been more alive.

The only problem was it took me three hours to get to that point. Oktoberfest is one giant party and can be slightly daunting. I learned some lessons in those few hours and the ones that followed. So from one lost tourist to another, here are a few tips.

Wear the traditional dirndl or lederhosen

Walking around Munich during Oktoberfest is like stepping back in time. Everyone wears dirndls and lederhosen. If there was ever a time you wanted to blend in with the crowd, this is the time and place. The outfits might cost you a pretty penny, but it is entirely worth it. (Spend the little extra money and buy the better quality outfits.)  I was nervous about looking like a cliché tourist, but I would’ve if I didn’t wear my dirndl. Plus, you’ll have a souvenir to take home. Not sure where you can wear it, but Halloween is always an option. 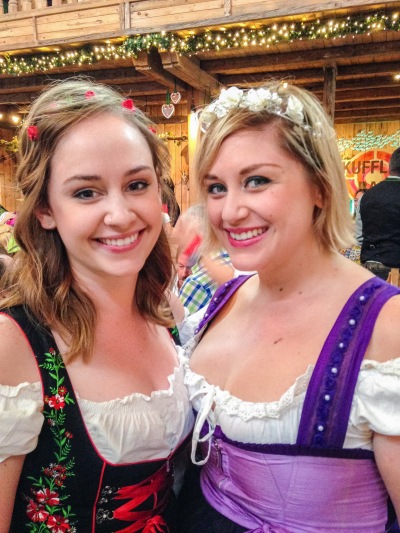 Try as many tents as possible

Each tent has a unique vibe and culture. The Schottenhamel tent was lively and enjoyed playing “Sweet Home Alabama.” The Augustiner tent was less flashy and focused more on the people in the tent. My favorite was the Hofbrau tent. A light blue canopy as the ceiling and draped vines and ribbons spread across the tent. Plus, there were men in their lederhosen standing on tables with whips. Yes, reread that. It was great.

Along with tables for sitting, there was the option to stand, which made it easier to find a spot. It’s the only tent with that option. But walk around, taste around and find which one you enjoy the most. Don’t stick to just one tent and one beer.

I heard people say that I should have gotten there around lunch time or sooner if I wanted a table, especially on the weekend. I didn’t listen and that’s what got me into the catastrophe I told above.  If you go on a weekday, you’re more likely to get in somewhere. If you choose the weekend, get there in the morning and hold down the fort if you want to stay in there till night when the party truly gets going.

Oktoberfest is not the time to be shy, especially since you’re usually crammed into a table with people you don’t know. The weekend wouldn’t have been nearly as fun if I didn’t meet other people. In my case, I met a large group of Scottish guys on a weekend bachelor trip. Everyone is there to have fun so join in.

Tables are not for standing, but benches are

Although I was tempted to stand on the table with this man, only the men with their whips and lederhosen can do it. Otherwise, it will get you kicked out. You can dance to your heart’s content on the benches but not the tables. And please do dance on the benches. It is a blast. Also, no fighting. This might seem obvious, but then again maybe not when there are thousands of drunk people. The Germans take Oktoberfest seriously, and they want everything to go smoothly. So if some drunk guy is messing around, he and his group will be booted out quicker than they can grab their beers.

Slip an extra euro to your server

The servers are incredibly busy, obviously. Tipping them along the way will ensure they keep an eye on your table. Because once your server is gone, you might not find her for a while. Although I didn’t have to worry too much about this one. Thank you, kind strangers who paid for me.

This is probably the best part about Oktoberfest – the singing. Now when I say everyone sings, I mean everyone sings. Depending on the tent, you might get some English songs, but the most fun ones are the classic German ones. Google and Youtube Oktoberfest songs so you can look like a real German when you get there. Also, prepare to lose your voice. Whether it be from singing or shouting in the loud tents, you will likely lose your voice.

Meat everywhere. It’s what I imagine heaven will be like. Hot dogs galore, pretzels hanging above the meat counters and enough bread to satisfy your comfort food cravings for a lifetime. Don’t run straight to the tents before grabbing a pretzel and some Weisswurst (white sausage special to Bavaria). But once you are inside, order some chicken, which is apparently amazing.

Hop on the rides before you down liters of beer

Again, might seem obvious, but I saw a lot of people getting sick on the rides after they had one too many drinks. Plus, after you spend all night in the tents, there’s no way you’ll make it out in time to experience the rest of the festival.

No really, I’m not saying this in a cheesy way. The only way to take in all Oktoberfest has to offer is to let loose and allow yourself to have fun. Don’t be shy – everyone is either tipsy or drunk. There’s basically no judging, unless you’re passed out on a table. Then, people might have a good laugh at you.

Honestly, just have fun and go with the flow. It’s the best way to experience it.