Ireland has always been on the top of my bucket list. The music, the people, the rolling green hills. Plus, Pinterest only furthered my obsession. So when planning out this past summer I made sure Ireland was on the list.

What I didn’t expect was just how much I would fall in love with it during the short week that I spent there.  It didn’t take long for me to discover why Ireland draws the masses that it does, and I only got to go to three towns in the country! In light of St. Patrick’s Day, here are 12 reasons to go.

This is probably one of the best parts about Ireland. The culture is warm and inviting, and the people are proud of who they are. They love their country but not in an overly zealous way. There was not a hint of arrogance in their culture. They loved who they were but they didn’t feel the need to shove it in everybody’s face.

Irish music has a way of making you want to stomp and clap and maybe even do a skip or two. I can’t quite explain how great it is.

I remember going to The Temple Bar in Dublin, which is a big tourist spot. It’s one of those places you have to go to because … well you just do. Even though you won’t get the authentic Irish pub experience, it’s still a great spot with some great music. The night I went there were two young guys playing a mixture of traditional Irish music and contemporary songs with an Irish twang.

Then suddenly I got that urge I was talking about – the one to act a fool. But then I reminded myself it probably wasn’t such a great idea considering everyone was laughing at a drunk lady doing just that. Granted she was out of her senses. But the point is Irish music has a way of making you laugh and feel alive, particularly when you’re in an Irish pub in Ireland.

Do I really need to expand on this one? Have you ever heard an Irish accent? They’re beautiful and rapturing. If you need convincing just watch this video.

Can you feel the freedom in this picture? Yeah, it just sort of happens when you walk along the cliffs in Ireland. Full of sheep and green grass, Ireland’s cliffs are something else. There’s something about sitting on top of a giant rock with your feet dangling over the ocean. I’ve never been one for beaches so this was the perfect alternative for me. I got to enjoy the ocean without trash floating by like in our great Southern California beaches.

Also, if you go, Slieve League and the Cliffs of Moher are the most popular lookout spots.

There are too many stories I could share right now to tell you just how incredible Irish people are. I’m not lying when I say every person I came across was wonderful.

For one thing, while I was walking out in the countryside one day by myself on a one-lane road,  every person I passed waved at me. I didn’t know them; they didn’t know me! They were genuinely that nice that they waved hello to anyone and everyone. Too bad one of the guys I passed who said “good morning” was loading up his kid’s car seat…

Then there was the guy my friend and I stayed with in Belfast. It didn’t take long for us to become friends. We initially met him on airbnb, and were just supposed to be staying with him for the night, but that changed quickly. We all decided to go to dinner together, then he set us up on a mural tour of Belfast, took us around to the best pubs after and then ended the night back at his place staying up till about 2 or 3 a.m. talking and laughing. It’s still one of my favorite memories.

Before I went to Ireland I didn’t have much of a clue about the country’s history. About the only thing I knew was the potato famine that brought a lot of immigrants to America. That’s really the only time we talked about Ireland in history class.

I had no idea how divided the country is, especially in Belfast. There is an actual wall that separates the Protestants from the Catholics, who have done a lot of fighting the past few decades. I remember a taxi driver in Glasgow telling us the Protestant side was covered in Union Jacks to show their support for Northern Ireland being a part of the UK. I guess he wasn’t joking.

When I went in August, the weather was absolutely beautiful. The skies would change from bright blue to dark grey within the hour. The rain would come pouring down, and I just sat there like a kid on Christmas. If you’re obsessed with rain like I am, then Ireland is the place to go. Hence all the greenery.

One morning while in Donegal (wrote a whole post on that lovely town here), I decided to take a walk by myself to explore. I happened upon this cove and sat there for about 30 minutes all by myself. There was nobody for miles. Instead of being scared of being alone, I embraced it. It was just me alone with my thoughts. Ireland gives you that. It provides solidarity without loneliness.

I think the picture pretty much explains my point.

I couldn’t write a post about Ireland without including their love of alcohol. I mean for goodness’ sake, Guinness is everywhere, especially in Dublin where you can visit their storehouse. It’s their drink, and they’re proud of it. (Although I tried a sip, and I didn’t really feel like I was missing much. Sorry.)

When I went to Donegal, there was an Irish dancing class happening the night I was there. I finally had the chance to dance my heart out to Irish music. My skills played out better in my head though.

I’m not exaggerating when I say the whole town came out. There were only a handful of non-locals, and we stuck out like sore thumbs. My feet dragged as the man I danced with pressed tightly against me and basically flung me around the room like a rag doll. He was actually Irish and had somewhat of a clue about what he was doing. The instructor spoke in Irish for most of the class (except when I messed up), but I had some good laughs. Irish dancing is unlike any dancing I’d done before. 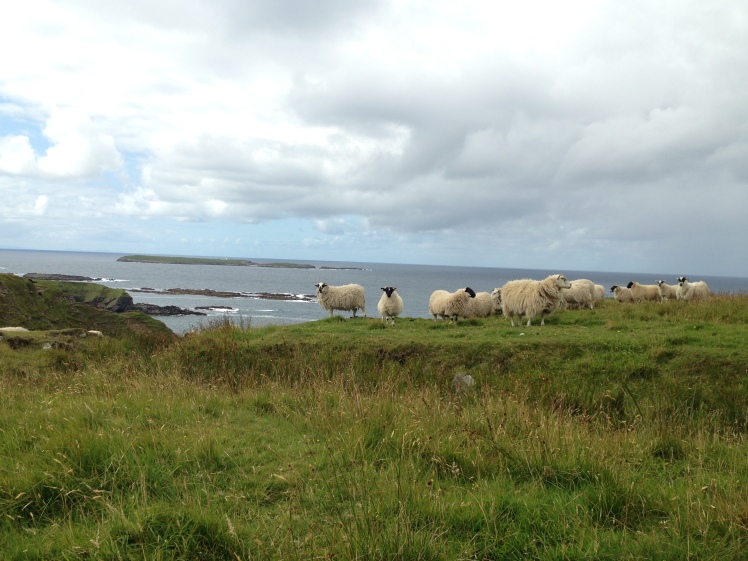 I just can’t keep sheep out of my posts about Ireland. They plague the hills like tourists plagued Temple Bar, although even more so. I tried to become one of their own, but oddly enough they ran away from me. Next time…

One thought on “12 reasons to go to Ireland”